Traditionally the tortellini can be made with a meat filling but I have opted for pumpkin instead.

This classical dish from the region of Valeggio Sul Borghetto, has an intriguing tale behind it! The legend of love and the pasta love knot (Nodo d’Amore), dates back as early as the 14th century, and is still celebrated and honored today in Borghetto, with an annual grand festival.

It is believed the legend began, with the story of Malco, an army captain who awoke one night to dancing witches, who emerged from the nearby banks of the river Mincio. The witches were cursed nymphs, who had been condemned to live beneath the river’s surface. One particular evening, one of the witches, Silvia, lost her cape and revealed her beauty to Malco, who immediately was attracted to the witch and was cast under her spell. As Malco pleaded for Silvia to stay with him, she in return gave him a golden handkerchief tied in a knot, as a sign of her love.

The following evening, at a party held for the troops, Malco recognized one of the dancers as Silvia. A jealous girl named Isabella, who also liked Malco, informed the guards that Silvia was in fact a witch. Malco defended Silvia and was imprisoned, as Silvia escaped.

This shape and resemblance of the golden knotted handkerchief, remains the inspiration for what we know today as tortellini or the pasta love knot (Nodo d’Amore).

You will need a pasta making machine to make the pasta

On a clean work surface sift the flour and salt together. Use your hands and to shape the flour into a circular mound. Make a well in the centre. Crack eggs in a separate bowl and use a fork to whisk lightly. Using the fork or your fingertips add the olive oil (optional) and eggs a little at a time, into the centre of the flour, gradually incorporate the flour being extra careful the egg does not run out of the wall of flour. Bring the dough together and add extra flour as necessary as you knead the dough for 6-7 minutes continuously. Divide the dough into four equal sections and wrap in plastic wrap. Keep dough aside to rest for 10 minutes, making it easier to roll out. Attach your pasta machine to the side of a workbench and fit to the widest setting. Dust the rollers and workbench area with flour. Unwrap a portion of the dough and use your hand to flatten out into a rectangle shape. Roll the dough through the machine. Dust again and fold the dough in half and repeat this process 5 times until smooth. Reduce the width setting by one, and roll through dough, each time reducing your setting until the dough is 1- 1.5mm thick. Be careful it is not too thin, as it can get stuck within the rollers and tear. Spread the sheets over clean tea towels. Be careful not to overlap sheets or they will stick. If they are over dried, they will crack. Cut into 8 x 8cm squares and fill with desired mixture. Fold in half diagonally to make a triangle shape. Take the side corners and bring them together adding a drop of water so the pasta sticks together and does not open up. Lay on a towel till ready to cook. Cook straight away in salted, boiling water, for a few minutes until pasta is cooked through. Drain and toss through sage and butter sauce.

salt and pepper to taste

Cut the pumpkin into wedges and bake in a moderate oven till soft, be careful not to burn or brown the pumpkin.

When cooled, mash the pumpkin into a large bowl with a fork and add the remaining ingredients.

Add teaspoons of the mixture onto the pasta squares as mentioned above.

The popular dish of “Nodo d’Amore from the local trattoria Alla Passeggiata in Valeggio sul Mincio. 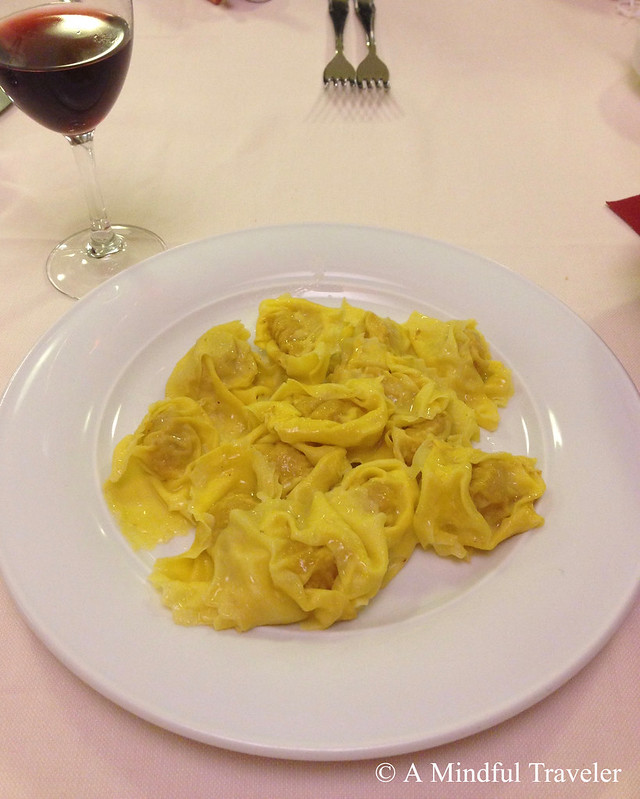 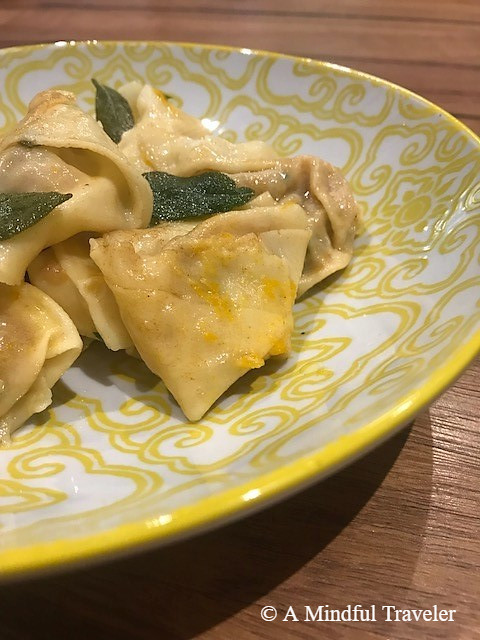 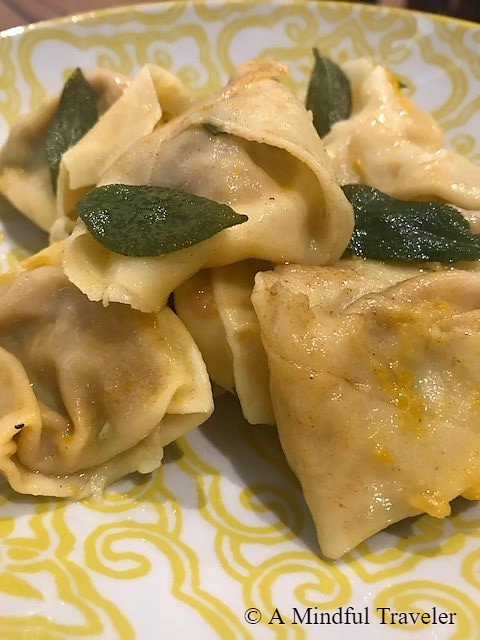 Just a reminder that voting for the Annual Blogger’s Bash Awards close tomorrow, so if you haven’t already voted A Mindful Traveler for the “Hidden Gem” award, then simply click here. Thanks everyone for all your support and Good Luck to all those amazing nominated bloggers out there. 🙂